These were sent in by Paul Robinson, can anyone put names to faces. 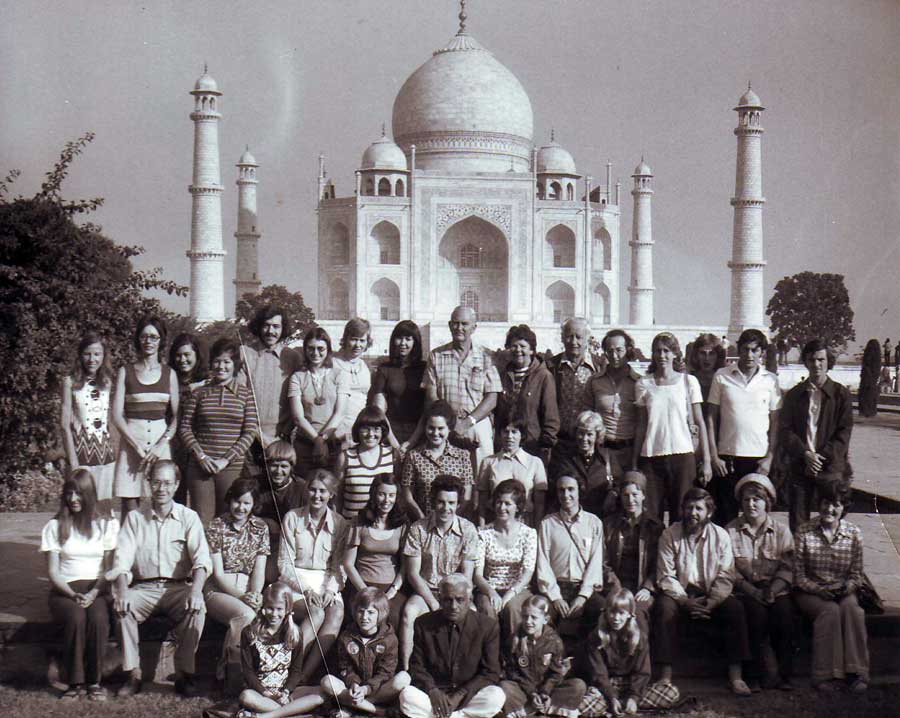 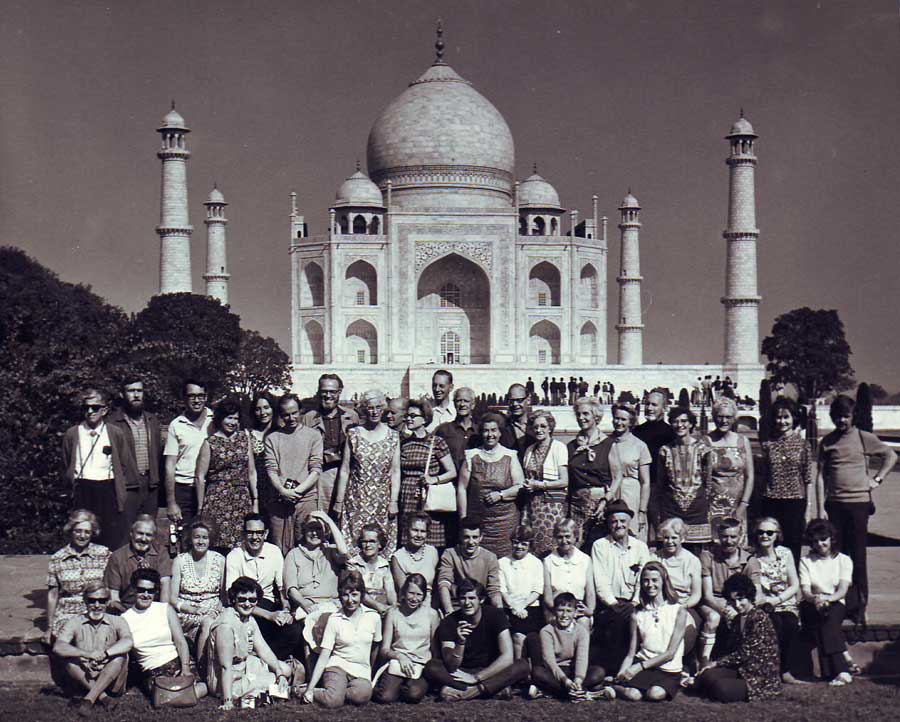 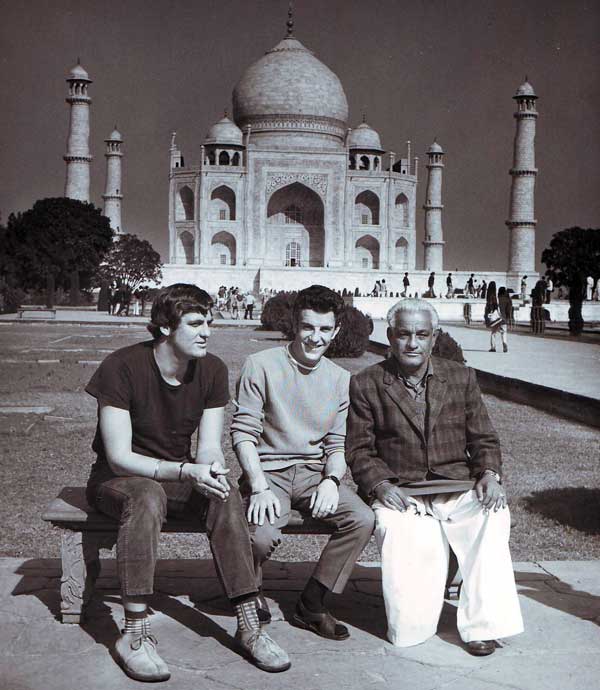 These are ex Penn crew 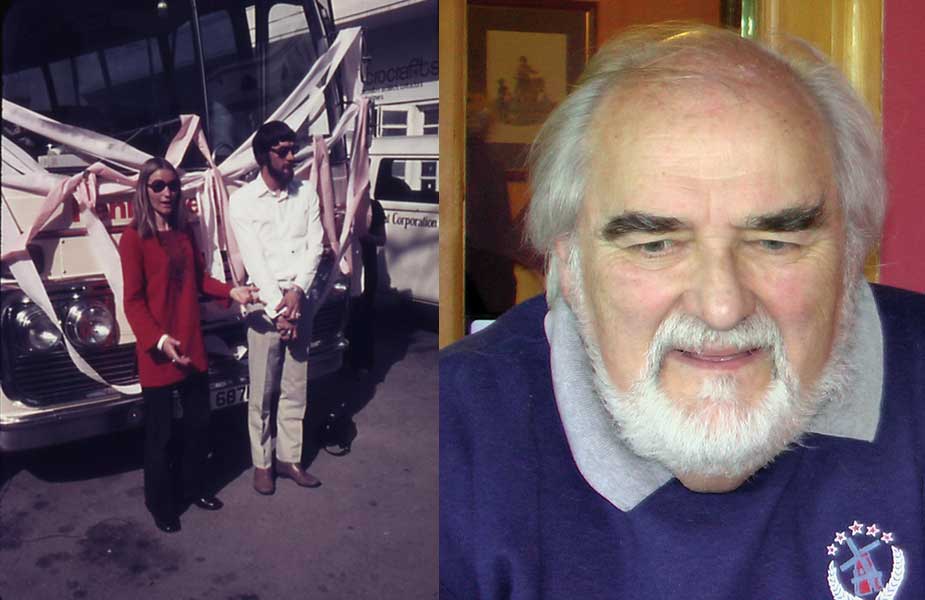 Picture of Margret & Travers sent in by

Linda Anchell who wrote:
Hello Derek,
I was looking for some British buses and found your greyhound bus site on India overland.
I was on the RY268 trip in 1971. We went from London in February.

I have a list of passengers and the crew  that I will copy below. Also photos of the bus, left behind at Lahore with Travers Cox (driver) and Margret Zimmerman (courier). We passengers hopped across the India Pakistan border to Amritsar to meet with another bus. The border was closed because of the recent India Pakistan war.
A few years ago I was contacted by another of Penn's passengers who had seen something I had written about my trip. I will have to go into the archives to find him. I'm sure he would be interested in your website and may have more information for you. bye, Linda
(Linda Anchell in  Australia)

I have not contributed for a while so here is a passenger list and itinerary for Pen Tour RY209 in 1975.

I can name two of the three in front of the Taj Mahal. The one on the left is Dick Cijffers, and the guide on the right is Mr Das.

Mr Dick is still going strong, but sadly Mr Das passed away before the overland did; I think he died in 1978-79.

Like Brian Stanley, whom I also knew, Travers Cox has also passed away.

Faletti's Hotel when out of business about 10+ years ago, but has now been renovated to a high standard and revived. I am staying there right now.

Hi,
I travelled on the 1978 Penn Kathmandu - London (SK1070) trip with Judy Strain. Our driver was Dave ... and our courier was Tony Jackson. I didn't keep in contact with anyone after we got to London as we were all dispersing in many different directions. My friend Judy died in a scuba diving accident off Vancouver in 1982, so I haven't really revisited the trip over the years. Many of my slides were damaged or destroyed when they got wet a number of years ago. Last month, however, I scanned my remaining slides and transcribed my diary.
With this renewed interest in the trip, I'm wondering if there are any fellow travellers out there??
Regards, Alison Mackenzie

I wasn't on that trip; I was a courier for another company. But that tour reference rang a bell. Have you seen these?

PS I'm still in touch with some Penn road crew.

Hi, I did London to Kathmandu  in 1978 - driver was Dave - our bus stoned in Bebehan when Dave lost 1 or 2 teeth and still managed to drive for 6 hours to Isfahan

Hi, I did London to Kathmandu  in 1978 - driver was Dave - our bus stoned in Bebehan when Dave lost 1 or 2 teeth and still managed to drive for 6 hours to Isfahan

I was on the trip leaving London for Katmandu in September 1978.
See my post dated October 2015. Do those events sound familiar?

I remember the stoning in Behbehan as I was hit by the rock but not badly hurt. However I thought our driver`s name was Ian
(not Dave) but I could be wrong.

I was one of the four Brits on board others being Carol who lives in London and I am still in touch with, Rick from Yorkshire and Patricia.

Can`t remember any other names after all these years.
The trip was full of mini disasters but to me these all made it more exciting. (remember sleeping in the customs post at the top of the Khyber Pass?)

Any of this sound familiar?

I replied to John's October 2015 post. His trip sounds a little different than that described by Janice and myself. Our driver was indeed brave. Was our courier named Nick - my memory is vague. Some of the incidents described by John (e.g. problems with visas for Iraq) sound a little different than our trip. Could there have been two trips which ran into trouble on entering Iran?

There must have been two separate trips albeit with very close departure dates.

Somewhere I still have the Taj Mahal group photo which I will try to upload onto here.

Our driver`s name was Ian Murray and there was definitely no courier.

Hi,
I did the London-Kathmandu Overland with Penn Tours , October -Dec 1971. I'm still in contact with a few from that trip so it would be great to hear how others  are. We survived the India Pakistan war, being reported as "lost" (which we weren't). We got out of the Srinigar road and made it in time to Delhi to hear Mrs Gandhi declare war. that evening. We only saw the Taj Mahal from nearby temples as it was closed. We have special photos of it with its camouflage of pine trees on. I haven't looked at my slides for ages, but have looked at my diary frequently. I  settled and married in Australia, had 2 girls and a boy and now 7 granddaughters.
Still in touch with Mary L and Gill F. Kind Regards to all overlanders, Kay.