HI Derek.
Ken McDonald here I have been visiting the AG site for a while
and I have been in contact with Ian Rodgers since I did my last trip and
he was around at my place in Auckland yesterday and we drove the road
again I think that we have Asian Greyhound blood in our bodies and the
life that we lived will never be repeated I enjoy the site and I have a look
at it most weeks ,
There are some funny stories about what happened in the workshop
in Guildford and slough.
When Gordon Hammond went missing on a job to wire up the
tail lightes on a bus and he ended up in Athens before he had
got it right and every one would ask WHERE IS GORDON every day
and when Norm would ring up he would all ways say where is Gordon.
The day Gordon went to get lunch and ended up behind bars in
the local police cells and we had a late lunch and the tales just
get better and the lives of the people live on. 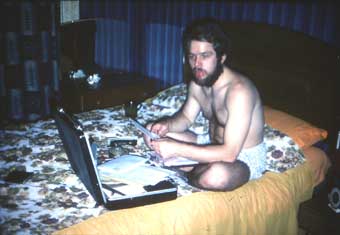 John Cridge and others

Hi Derek,
Yeh I think after so many overlands J.C's (John Cridge) bowels exploded and he had to retire or maybe he joined aAkl Khaida there were so many guys and it was so many years ago.
Having read a bit more of your valiant effort, of the first aussie you met.......
I think Norm is actually a pom....
think he was born in uk then went to oz as a child was probably beaten up for being a pom so became ultra oz as it were. He loved those buses so much he named his kids after them I remember Guy &???
Fearless Fred the fireman (from orange) is painting or sculpting, doing something creative in the bush somewhere I think.
Bob Ashford was he with 'wogdog' he may have been, some poor carpet vendor is probably still chasing him for payment on a consignment of rugs. With JC as our driver we had trainees Tim, Nigel and Geoff but don't know surnames and not sure if they continued with wogdog or not....Tim may have.
last I heard of bob ashford he was with 'peregrine adventures' not sure haven't seen him since.....'76 when he went off to do tours of the foothills in Kathmandu.
guys from London office Dave Richardson and John Osborne,
fearless fred was a flatmate at 'Sutton Court' (Chiswick, London) for a while.....as was John Felan who ran Kimbla African adventures......my son is going to the Kotor pass tomorrow or so he says. with internet and sat phones its much easier these days..
Yeah I would love a dvd. Sort of sad reading your bit on bamian, we didnt get there as the bus needed work and we all enjoyed kabul so much in a blurry sort of way between smoking & munchies.
I think I will look for my old rather sketchy diary as well and see if I still have slides.
Regards