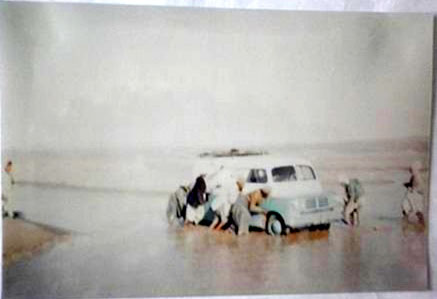 I recently read in an article in a WA Sunday newspaper about a book ‘Far Away Places with Strange Sounding Names’, a book I am sure with which you are very familiar. I finished it last week (excellent does not even come close to describing it) and sent off an email to Gerald Davis asking if I actually met him one day in Quetta. He replied that I had more than likely met the Indiaman.

In October 1960 my colleague and I, aged 22 and 23, bought a second hand Bedford Dormobile and set out from Bristol to see the world. Our plan was to drive it to India, ship it to Singapore and sell it there, which we did.
The second part of our envisaged world trip was to work in Australia to get enough money to go on to Canada, buy another vehicle and drive through the Americas to Cape Horn. Unfortunately this part did not eventuate as Ian fell in love with a New Zealand girl in Perth and took her home to Bristol where he married her. I stayed on for another few months and to complete my dream of going around the world I sailed to Sydney, through the Panama Canal and back to the old country. The tallest man on that ship met the tallest girl on board, also originally from England, married her back in Australia , near Sydney, produced two offspring and eventually retired in Bunbury, WA.

Sorry about this long introduction – all part of a long story! When Ian and I reached Quetta we parked close to a bus on its way to England. I am sure it was named ‘Waltzing Matilda’. The leader/driver spotted our canvas annex on our roof rack and asked if we wanted to sell it. Actually we had never used it all the way through, so we were pleased to unload it to someone who could make use of it. Back to my Subject question : “Did we meet in Quetta?”. It would have been probably May in 1961.
clip_image002

In Gerald’s reply to me and backed up several times in his wonderful book, he did point out that you made many, many journeys and had several guides and drivers, so we personally may not have met face to face, just the Dormobile and the Waltzing Matilda !
I look forward to your response,
Best regards,
Clive Overton