I've just had a very welcome phone call from Geoff Lawrence who put me on to your brilliant site. It certainly brought back many memories.

I can't remember whether or not we met, but I've heard your name many times over the years.

I first did a trip - as a passenger - with Asian Greyhound - eastbound leaving September 1976, with Geoff as driver (I actually appear on the passenger list on the site!). We were later joined by Fred Fisher. It was a real life changing experience for me and I subsequently worked for Norm Harris, driving another eastbound trip which left UK in about April 1977 (I think). I had a co-driver called Plumb (can't remember his real name) who'd done a westbound trip as a punter with Clive Parker.

I remember meeting another Swagman bus in Kabul, driven by Tim Harrison (?) who was sadly killed in a car accident. Asian Greyhound went bust during this trip, so the bus was sold - I returned to the UK from Delhi and Plumb went back to Oz (as far as  I know) and I've never heard from him  again. I did a few jobs for Norm in Windsor in the workshop - and the odd school run!!!) Ian Rogers was another of the Swagman drivers I remember.

On that trip I met Bobby Hughes & Zak Bentham - both Intertrek/Hughes Overland drivers. When they heard of the demise of AG, they passed my name on to Dave Johnson aka Bloss (who was ops manager at the time) and I set off eastbound again in about Nov 1977 (the fridge trip!). I had a trainee driver with me - Colin Sinclair - an ex-cop from Hong Kong - great guy. He married one of our passengers (Mary something) - once again lost touch.

By the time I got to Kathmandu - Intertrek/Hughes had been taken over by Treasure Treks/Tours - owned by the infamous Aart van Saloos.

Did a westbound, leaving Kathmandu about Feb and getting to UK about the end of May - picking up bacterial pneumonia on the way!!!

Did a couple of trips on the Scandinavian sector of the Trans Siberian trip before going to the States, where I did several coast to coast tours. The operation was subbed out to an outfit called American Camping Expeditions run by a guy called Mike Richardson. I was there for about a year and had a great time. There was another ex Hughes driver - Buster something (old age is getting the better of me!!!) who I sort of stayed in touch with for a while.

Came back to the UK and worked in the Treasure Tours office in the Haymarket, London - before heading out to South America, where I bought my own bus in the States, shipped it down to Baranquilla in Colombia and did a couple of very incident packed trips, (as a sub contractor to Treasure Tours/Treks) before they went bust - leaving me in the middle of the Atacama desert with a blown motor, no money and 25 very pissed off punters! There's a book in the South American saga somewhere! (Geoff Lawrence is always nagging me to put it down on paper!)

Worked in Africa for Exodus for a while (it turned out that Dave Gillespie and I went to the same school!) then had a bit of break for about 2 years.

Got married and had a working honeymoon working for Geoff Hann in India & Nepal.

Great to roam the site - I'm hoping I can catch up with a crowd of old pals.

I've got loads of info, stories, photos, passenger lists from all my trips - and you're welcome to use it all for the site - just tell me what you'd like. I've even got pretty much a full set of "Bitts" the drivers newsletter from Treasure Tours/Treks. (God! how sad is that??!!)

Hope you are well & thanks again for putting together such a great site!

Look forward to hearing from you.

PS I'll pass detail;details of the site to those I'm still in touch with - notably Alan Morgan (originally Intertrek/Hughes, but went on to co-found Guerba)

PPS the attached pic was taken near Bam in Iran - I guess around May/June 1977 - I remember it was bloody hot then! 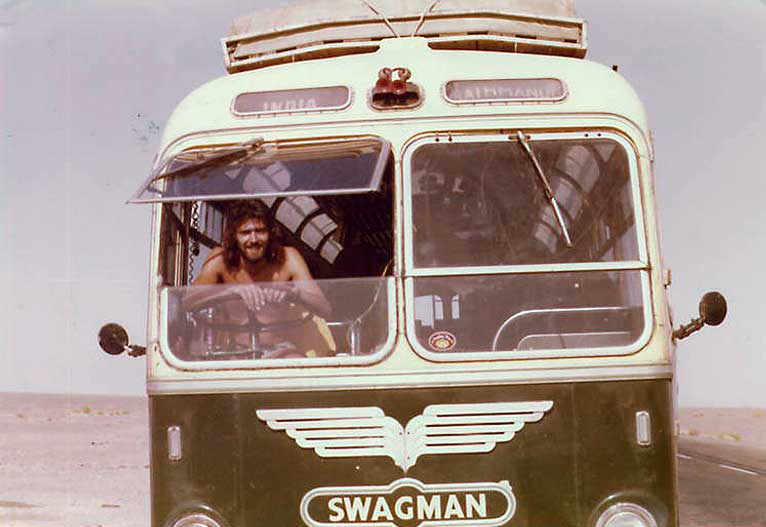 Sent in by Rob McKay

How have you been?  You're timing is uncanny.  Just as the newsletter arrived, I'm working on my photos for the book.  So, here's a little treat for your memory channel.  Streets of Delhi 1973.  That's Bob Ashford!!  I'll send you more as they get loaded into the file. 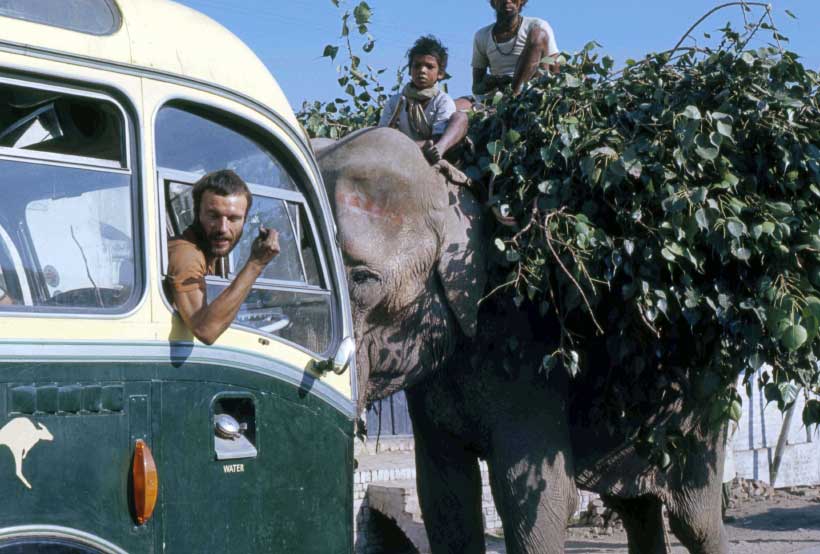 Bob not getting his way with an elephant, bit like this altercation with Norm